When it comes to electric vehicle maker Tesla (TSLA), there have always been a number of skeptics. As a result, one part of the bull case for the stock is that large short interest could lead to a large short squeeze on good news, perhaps something like the company’s Battery Day event that’s currently scheduled for this September. However, I’m here today to look at this important angle because the current situation may not be what most people think it is.

When it comes to short interest, the first thing to look at is the number of shares short the stock. As the chart below shows, short interest at the most recent Nasdaq update set a new yearly low. That might not be surprising to some, given Tesla shares are trading near their all-time highs. However, we’re getting back to short interest levels not seen for a number of years, and that was a time when Tesla was a much smaller company and thus the number of shares short was much more important. More on that angle in a bit. 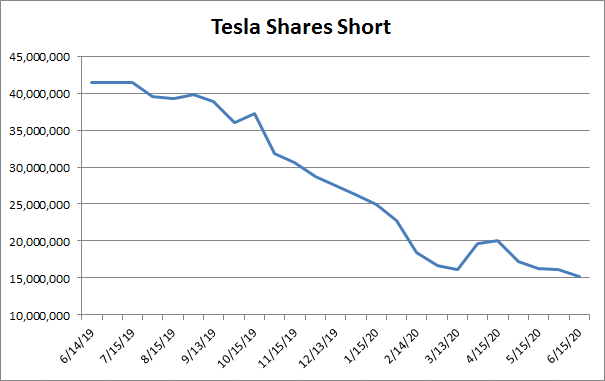 Because of Tesla’s stock price surge, the dollar value at risk for these short sellers jumped in early 2020. The mid-April update was comparable to where we are now, because at that time you had more than 20 million shares short and a stock in the low $700s. Of course, we also don’t know how much of these negative positions are hedges against Tesla’s convertible bonds. Some of those notes started maturing last year, with more coming due in the coming years. That could explain part of the short interest decline as the hedgers unwind the pair trade.

The second important item to watch is the days to cover ratio. This figure measures how long it would take all short positions to be covered, based on average volume over a given time. Late in the summer of 2019, this ratio topped 6.2 for three straight bi-monthly updates, meaning it would take a bit more than a full week of trading volume for all shorts to cover. Fast forward to this June, where we not only have short interest down more than 63% in the past 52 weeks, but volume surging as well.

So far in 2020, every days to cover ratio as detailed by Nasdaq in the link above has been below 2.0. In fact, all but one update was below 1.4, with the one outlier being the time that included some soft volume around Memorial Day. There were even two updates with a days to cover under 1.0, and the latest figure stood at just over 1.28. With this ratio coming down substantially, it makes the chances of a short squeeze come down dramatically.

The other important item I usually look at is how the number of shares short compares to the number of shares outstanding, as well as the stock’s float. A stock that has 10 million shares short and say 30 million outstanding is much more likely to have a squeeze than one that has 10 million and 100 million, respectively. In this scenario, the assumption is that the float percentages of shares outstanding are the same. As the chart below shows, and most investors probably know already, Tesla has diluted investors quite a bit over the years. 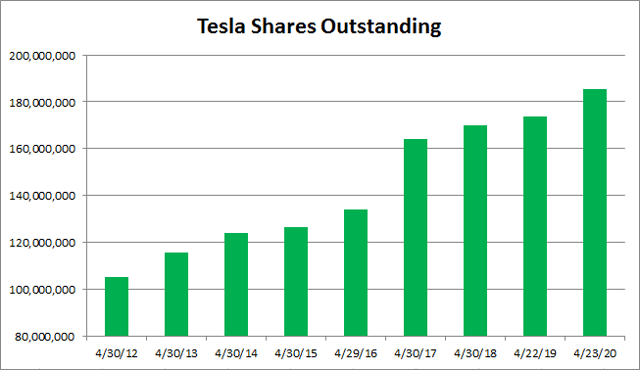 This large amount of dilution has come through a combination of several capital raises, a couple of acquisitions (primarily the SolarCity deal), and stock-based compensation. With Tesla not currently buying back its own stock, the number of shares outstanding will continue to rise for the infinite future. Data provided by Yahoo Finance details the following float numbers that I’ve tracked over time:

What’s the key takeaway here? Well, if you are betting on Tesla going much higher because of a short squeeze, chances of that happening have been greatly reduced. That’s not to say the stock can’t go higher still on good news, like the company perhaps beating Q2 delivery estimates. However, a short squeeze isn’t likely in the cards with short interest down by nearly two thirds in the past year thanks to a tremendous rally, along with the days to cover ratio hovering a little above one. If you are looking for a stock with a high percentage of shares short that can be squeezed much higher, Tesla doesn’t really fit the bill at this point.

Disclosure: I/we have no positions in any stocks mentioned, and no plans to initiate any positions within the next 72 hours. I wrote this article myself, and it expresses my own opinions. I am not receiving compensation for it (other than from Seeking Alpha). I have no business relationship with any company whose stock is mentioned in this article.

Additional disclosure: Investors are always reminded that before making any investment, you should do your own proper due diligence on any name directly or indirectly mentioned in this article. Investors should also consider seeking advice from a broker or financial adviser before making any investment decisions. Any material in this article should be considered general information, and not relied on as a formal investment recommendation.